Agency Sauce was briefed by Jewson to promote the launch of their new tools website www.jewsontools.co.uk. An opportunity was spotted to expand Jewson’s brand reach when research showed a rising trend of customers buying tools online. A campaign was designed to engage with this social media savvy generation of trade professionals.

A Facebook competition was developed to coincide with the premiere of the latest James Bond film.

Existing Jewson customers and visitors to the Jewson Facebook page were prompted to send in their ‘Best Shot’ pictures in the style of James Bond. To encourage sharing, it was announced that the winning photos were to be chosen by the public, with the top three winners receiving a DeWalt battery toolkit and an iPad.

Pictures of tradesman posing as James Bond with full-size Point of Sale stands were placed in Jewson branches throughout the country to promote the competition. Participants were directed to the Jewson Facebook page with the option to join in using a dedicated iPhone iOS App, which enabled on-the-spot submission of their photos.

A targeted Facebook advertising campaign was planned, designed and managed by Agency Sauce to drive visitors to the page, where they were prompted to ‘Like’ the Jewson page in order to submit their competition entry photos. 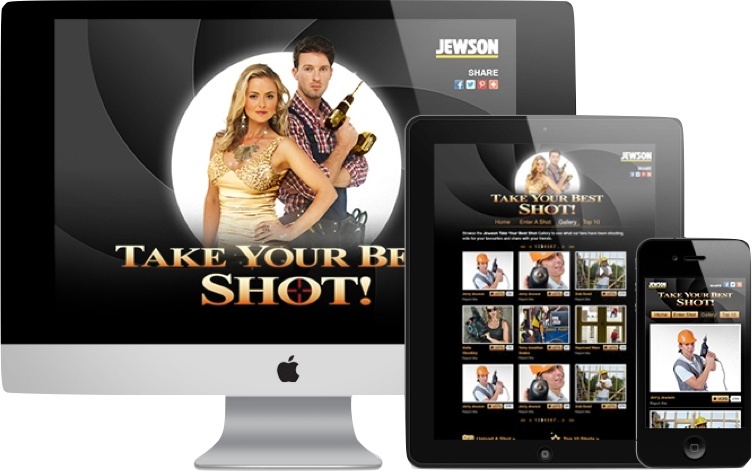 In the six-week campaign, the brand awareness surrounding Jewson increased online, and the competition led to a growth of over 350% in the Jewson Facebook page placing them as the largest Facebook page in their sector.

Jewson was provided with an audience to take advantage of their promotional offers, driving sales on the newly launched Jewson Tools site. It also gave them followers that they could continue to grow with further innovative competitions. Local media coverage surrounding the individual competition winners also drove increased business to local branches.

As an added bonus, positive activity surrounding the competition regarding a heating and plumber engineer who was also a cheerleader showcased Jewson’s positive attitude and policy towards equal opportunities.

“Working with Rob and Murray is an exciting and rewarding process and the excellent end results speak for themselves.”