Flagship restaurant launch; building loyalty and sales up to the subsequent roll out across the UK and generating high level awareness amongst the local community.

Manufacturing giant Bakkavor Foods approached Agency Sauce to discuss the launch of their first casual dining restaurant in Nottingham city centre. The concept? A restaurant offering fresh, fast, custom-made pizza in just 180 seconds using a 900-degree oven. The vision? To be the number one quick service pizza place on the high street with a fun, approachable brand identity. 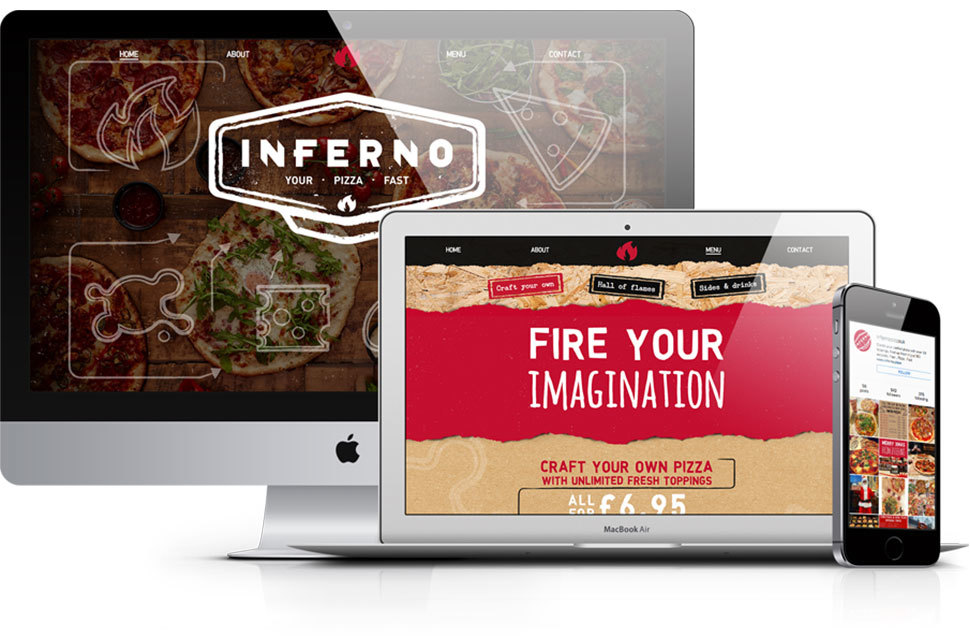 The challenge lay in building a brand and social media presence from scratch that would create a following of loyal fans and advocates. The team recognised the need to find a way to target Inferno’s ideal audience (16-35-year olds within 5km of Nottingham) and to raise local awareness of the brand through social media and traditional PR.

Using expert copywriting skills, the team came up with a series of catchy slogans, messaging and names for Inferno’s ‘Hall of Flame’ signature pizzas. Meanwhile, the Agency Sauce designers created all of the design material for the restaurant. From menu cards to board and table wobblers, all branded items were designed in line with the brief and key messaging.

Inferno’s follower growth on Twitter was turbocharged by the team building a huge target list of users that were implicitly interested in eating out in Nottingham. Similarly, using a Facebook local awareness ad campaign, Inferno’s messaging was aimed at the target audience to drive awareness and engagement.

Using local business knowledge and harnessing strong contacts with key local press outlets, Agency Sauce also organised a series of pre-launch events, to which local businesses and food bloggers were invited. Also on the guestlist were print, radio and TV journalists to cover the event and further increase brand awareness.

Our social media approach was ‘always on’, ‘always listening’ and ‘always responding’ which helped to ensure that the restaurant was always operating above forecast and just under capacity level – translating PR and social media activity into sales.